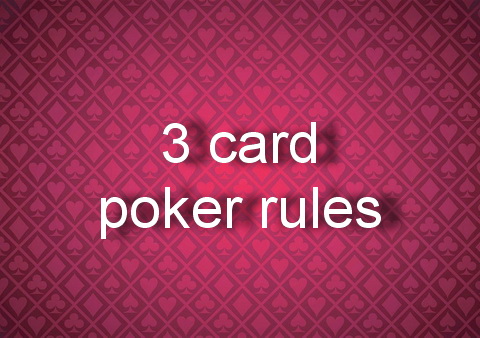 In a previous article, we discussed the rules of Caribbean poker. Now is the time to learn three card poker. Casino poker has many card gaming variants a player can choose from. Among the options, the 3 card poker presents the most thrilling and paced casino poker gaming variant. Learning and playing the game is very easy; thus, anyone can quickly learn and play this game. However, it’ll be good to understand all the 3 card poker rules before playing the game online.

However, before you understand how to play the game, it’ll be necessary to go through all the details about the fast-paced casino poker games. This article guides all the players on what they need to understand: 3 card poker rules, the hand ranking, and strategies they can use while playing the game.

Before you start playing any poker game, it’ll be good to start by understanding all the 3 card poker rules. Once you understand the rules well, you can go ahead and play 3 card poker online successfully. The main achievement of this game is for the player to use the three bigger cards in your arms to beat the dealer. While playing this casino game, the players use a standard 52-card deck. Below is the step-by-step guide of the rules for the first round. However, in a single game, there will be four equal rounds depending on the results of the prior round.

Compared to other forms of casino poker, there is some alteration in the ranking of this game. Because the chances of hitting a straight draw in this game are very low, as the most likely result is the flush draw, the dealer will base the outcome on the ranking. The following are the 3 card poker hand ranking; on top of the lists is the highest 3 card poker hands:

The experts classify the 3 card casino poker game as a decision-based game. The reason being the player will make their decision after seeing the cards in his hands. The player will decide to continue by placing a play bet or folding to quit the game. All the decision-based games have specific optimal strategies the players can use. The 3 card poker strategies involve studying playing charts or patterns.

The optimal 3 card poker strategy for the play and ante bet includes QUEEN- SIX – FOUR. The strategy implies that if the player’s hand is the same or stronger than the Q-6-4, the best decision is to make and raise the play bet. While using this technique, it’ll always be good to check each card separately while playing.

The 3 card poker card game is a straightforward casino poker game to play. The game uses the traditional 5-card poker concept for the gameplay. After learning the 3 card poker rules, hands, strategies, and how to play the game, you can easily get online and enjoy the game. To easily beat the dealer in the game using the cards on the hands, using the optimal strategy will be the best way to go. The gaming experience presents a more exciting and thrilling experiment for the players, especially first-time casino players.